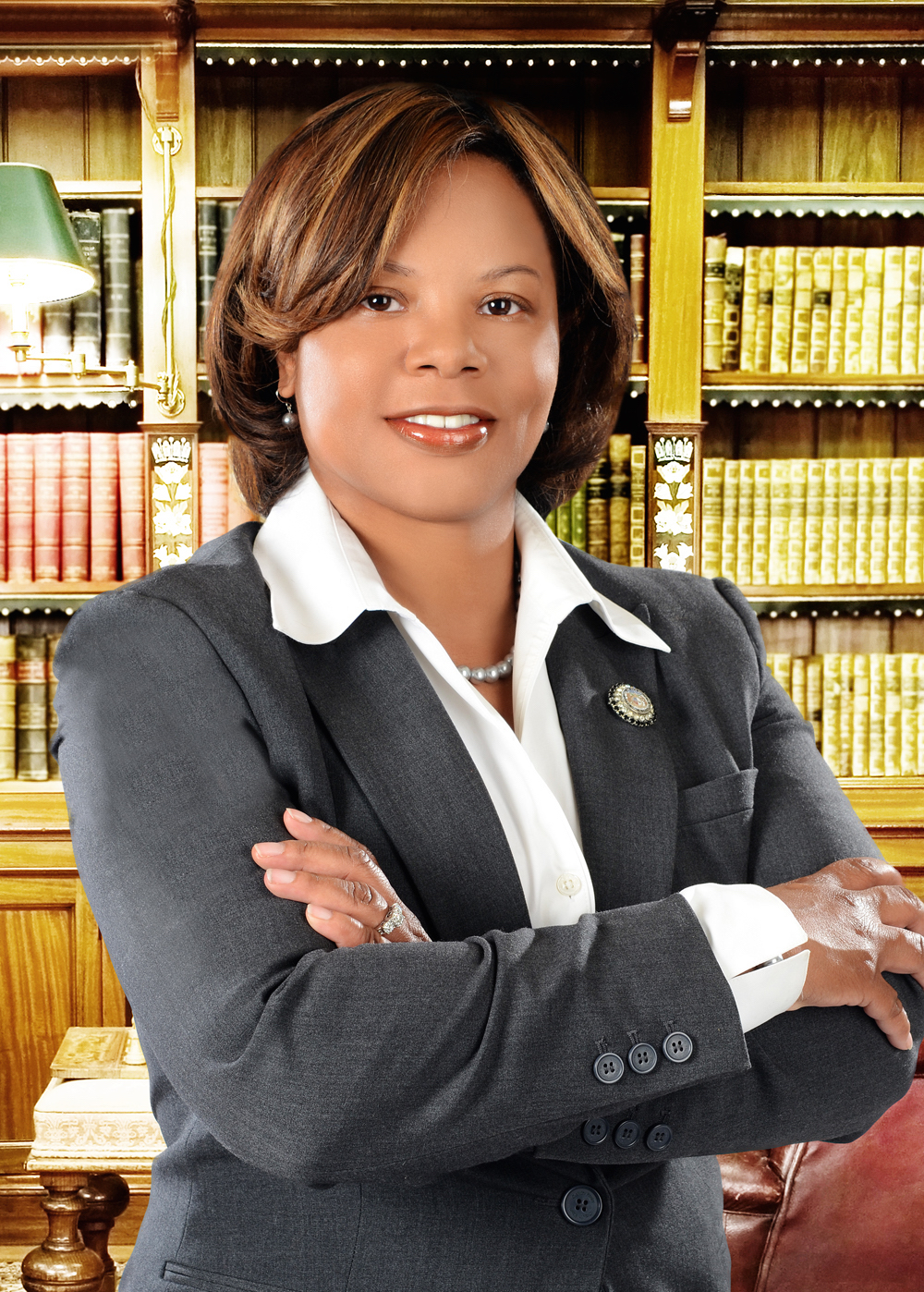 Senator Jamilah Nasheed is a Democrat representing the 5th Senatorial District in the Missouri State Senate. Senator Nasheed was born on October 17, 1972, in St. Louis, Missouri, where she resides with her husband, Fahim Nasheed, and is caretaker of her 15-year-old cousin, Najawah Williams. Senator Nasheed was elected to the Senate after winning her primary in August, 2012.

Since assuming her seat in the upper chamber, Sen. Nasheed has been pivotal in passing several important pieces of legislation. In her first session, Sen. Nasheed successfully fought for Senate Bill 125. That bill both protected students in the St. Louis area from ineffective teachers and created the “St. Louis Plan” in statute, making teacher dismissals jointly authorized by the teachers union and the school administration.

The 2014 session saw Sen. Nasheed working for the passage of two bills, both essential to the St. Louis community. Senate Bill 532 gives a relative caregiver the right to make medical and educational decisions for the minor in who is in their custody, ensuring a bright future for all of Missouri’s children. Senate Bill 731 helps protect neighborhoods in St. Louis by expanding the definition of ‘nuisance’ to add that property affecting the value of neighboring buildings and the property owner is liable for any failure to maintain the property. By leading this cause, Sen. Nasheed proved, once again, that she continues to fight for citizens of St. Louis, lending voice to the voiceless.

Education is of the highest importance to Sen. Nasheed, as shown by her continuing pursuit for funding of the Math and Science Tutoring Program for students within the St. Louis Public School District, included in House Bills 2002 and 2011. The governor released $500,000 to fund the Math and Science Tutoring Program for 2015, which will improve the future prospects for local youth and will expand opportunities in higher education for many St. Louis students. Senator Nasheed has also been a guest lecturer at the St. Louis School of Pharmacy and Washington University in St. Louis, further demonstrating her personal investment in the youth of the community.

Following the unrest in Ferguson, Senator Nasheed reached out to young people in the community during several speaking engagements at area universities. Topics included community policing, and education legislation.

In addition to her legislative duties, Sen. Nasheed is a member of the A+ Schools Program. She also crafted legislation regarding the A+ program, which will allow students to go to a 2-year college or technical school at no cost to the parents for students who were in unaccredited school districts. She is also a member of the Order of the Eastern Star fraternal organization.

Furthermore, Sen. Nasheed is a former board member of Inspire STL, which supports middle school students through the high school application process, to empower the community to create better options for parents, and to sustain academic momentum through their academic journey.

She is a founder of the “In It 2 Win” Coalition, which identifies students who have dropped out, or were pushed out, and assists in returning them to the classroom. Also, the Fresh Start Program, which is a non-traditional program that encourages and empowers youth between the ages of 17 and 21 to return to the classroom to receive their high school diplomas.

In 2014, she received several awards and recognitions. MOKAN recognized her with the “Public Sector Executive of the Year” award, she was recognized by the Missouri Workforce Housing Association, and received the “Spirit of Justice” award from the St. Louis Bar Foundation. In addition to these awards, Senator Nasheed has been recognized with a number of honors including: Better Family Life’s “Excellence in Political Leadership” award, Low Income House Tax Credits “LITHC” award, and St. Louis Regional Chamber’s Board of Directors 2nd annual “Championing a Greater St. Louis” award.

Senator Nasheed has been recognized nationwide as a civil rights leader and has made appearances on CNN, Fox News, MSNBC, and several other nationally syndicated programs to discuss the state of civil rights in the St. Louis area. She is a strong proponent of reform in the justice system

For over a decade, Sen. Nasheed was the owner and operator of the first female African-American independent bookstore in the city of St. Louis, Sankofa Books and Gifts, an inner-city bookstore. The bookstore mission was to promote the importance of reading. Senator Nasheed attended Roosevelt High School in St. Louis, and, years later, received her high school General Equivalency Diploma. She is working towards a degree in communications.

Maxalt begins working in as little as 30 minutes. You can buy Maxalt online without prescription

Senator Nasheed travelled to India as part of a bipartisan trip sponsored by the American Council of Young Political Leaders. The Senator was selected as a delegate from a pool of over 1,000 local, state and national nominees. She engaged in dialogue with senior government and political officials, industry executives, and community leaders on a wide range of political, cultural and economic issues.

Please check your e-mail for a link to activate your account.

Jamilah Nasheed in the media

Created by LocalPolitechs Strategies with NationBuilder